Reserve a seat today. No obligation

Price: Starting at $399 for government employees

Reserve a seat today. No obligation.

Scrum@Scale is a lightweight, flexible framework designed to deliver the benefits of agile on a large scale — from 30 people to 30,000. Scrum@Scale is built by the original creator of Scrum, Dr. Jeff Sutherland (US Air Force retired) and is a natural extension of Scrum, which is by a wide margin the most widely used Agile framework in the world. Unlike some competing scaling frameworks, Scrum@Scale is completely compatible with both the Agile Manifesto and core Scrum values.

Graduates who pass a brief exam will earn the official Scrum@Scale Practitioner certification.

The first Scrum@Scale prototype launched in 1983, providing over 35 years of evidence the concepts are sound. Some organizations that have struggled with competing top-down scaling frameworks have significantly improved productivity and quality using Scrum@Scale.

We designed this class from the ground-up for federal, state, and local US Government agencies and the contractors who support them. Dr. Sutherland started his career as a fighter pilot in the US Air Force, where he achieved Top Gun status and flew 100 combat missions over North Vietnam. His experience in life-and-death situations influenced the “Minimum Viable Bureaucracy” approach to Scrum@Scale. And the concepts are compatible with those relayed by General Stanley McChrystal in his groundbreaking book, Teams of Teams.

We strongly recommend participants understand team-level Scrum prior to the class. For a brief but effective introduction, we recommend the following video: https://youtu.be/D8vT7G0WATM 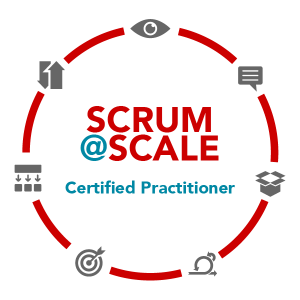 Dave Witkin is one of only 100 people in the world personally trained and certified by Dr. Jeff Sutherland, the creator of Scrum, to teach Scrum@Scale. He is one of only two Scrum@Scale trainers focused exclusively on the US Government. He has focused on large-scale programs (i.e., up to $2.6B and involving 500+ people) during his nearly 30-year career consulting at 10 different government agencies, and has taught hundreds of students to use Scrum, Scrum@Scale, and other agile scaling frameworks. He practices what he preaches and is currently leading efforts to apply “effective agility” across a large agency and coaching several large scaled agile government programs.